I’ve been thinking recently about the differences between the Wi-Fi and Bluetooth logos, especially in relation to the more universal symbol for wireless connections.

Both the Wi-Fi logo and the Bluetooth logo are trademarks that are supposed to stand in for international standards. (Of course the “fidelity” of “Wi-Fi”—coined in analogy to “Hi-Fi” (High Fidelity)—is largely nonsense, but it gives a sense of how the brand is a sign of quality.) Even more significantly, both make use of premodern mythology, specifically, in terms of uniting conflicting forces.

The Bluetooth logo is apparently a “bind rune” for Harald “Bluetooth” Gormsson (i.e., it’s his initials ᚼ (Hagall) + ᛒ (Bjarkan)), the King who unified Denmark and Norway, just like the technology is supposed to unify protocols for computers and cell phones.

Still, neither of the logos seems to represent the function or medium of wireless transmissions as does the general symbol for wireless connections. 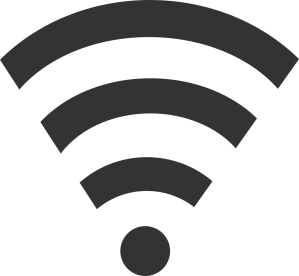 I read the symbol for wireless connectivity as a throwback to the most common symbol for broadcasting and for electromagnetic waves—concentric circles radiating out from a single point, as if a stone had been dropped into water. Making a wireless connection, the symbol (somewhat misleadingly) suggests, is like shooting a ray-gun, broadcasting one’s voice with a megaphone, or even throwing a stone into a pond.

But I still wonder where that iconography of electromagnetic waves itself comes from. Why are wireless transmissions usually represented in terms of concentric circles radiating out from a single point? Is it just the general idea of “waves”? Some specific experiment in physics? Or most likely, the representation of signal range on maps of national broadcasters?