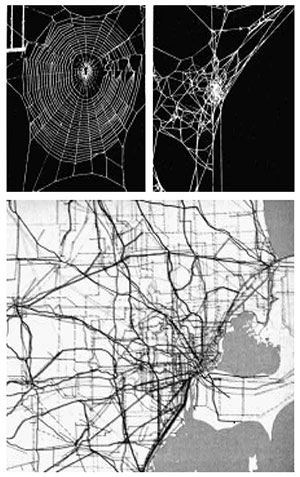 In spite of its title, Mark Wigley’s “Network Fever” bears little resemblance to Derrida’s Archive Fever. For Derrida, catching “archive fever” means having “a compulsive, repetitive, and nostalgic desire for the archive, an irrepressible desire to return to the origin, a homesickness, a nostalgia for return to the most archaic place of absolute commencement” (91). Basically, Derrida equates a desire for the “archive” with a desire to return to a point of origin, as evident in his etymology of the term “archive” (arkhē”). Wigley’s “network fever,” on the other hand, is a more general symptom of modern information technologies. To historicize then current hype about networks (in 2001), Wigley suggests that “we are actually at the end point of the network logic,” and more specifically, that “contemporary discourse about the net simply realizes nineteenth-century fantasies that were acted out throughout most of the last century” (84).

To some extent, Wigley is also concerned with the problems of origins—namely, the origins of thinking about networks. Significantly, Wigley does not locate these origins in cybernetics but rather in architecture at two main historical moments: Constantinos Apostolou Doxiadis’s foundation of “ekistics,” the science of human settlement, in the 1960s; and the establishment of the Congrès internationaux d’architecture moderne (CIAM) in the late 1920s. Siegfried Giedion was one figure who provided symbolic “continuity” between the two moments, holding a closing speech at a renowned 1963 boat trip Doxiadis had organized. This boat trip, from Marseilles to Athens and back, was itself an operation in social networking, bringing together leading intellectuals, including Buckminster Fuller and Marshall McLuhan, to discuss the problem of global settlements.

Much of the thinking about networks at the Delos meetings and in the Ekistics journal drew on organicism. For example, Kenzo Tange compared organic urban growth in Japan to the central nervous system (Are there parallels here with Fritz Kahn’s image of the city as a central nervous system from the 1920s, some forty years earlier!?), and Doxiadis himself presented two photographs that created an analogy between the “chaos of networks” in urban Detroit and a spider’s web that had been created after it was drugged with amphetamines.

Ultimately, Wigley’s point is that the media studies discourse of networks in the 1960s, exemplified here by McLuhan, paralleled, or perhaps even followed from, the architectural discourse from the same period, exemplified by Doxiadis’s circle. Furthermore, the origins of this way of thinking about global networks can be traced back to an earlier generation of architects and designers from the late 1920s. Still, I wonder whether Wigley might be overstating the case for architecture as “first philosophy,” or leading science. His arguments could probably be extended by comparing thinking about networks across further disciplines, or “Wissenskulturen,” during one specific swath of time.

As for wireless technology, it surprised me to see it described here as a “mode” of information technology: “Everyone has become a kind of expert, ready to discuss the different types of nets (computer, television, telephone, airline, radio, beeper, bank . . . ) or scales (global, national, infra, local, home . . . ) or modes (cable, wireless, digital, optical . . . ).” What surprised me even more, though, is that Wigley perceives everyone to be an “expert” about this wireless mode, whereas Lisa Parks claims the exact opposite—that nobody talks about wireless technology because we lack knowledge about it.